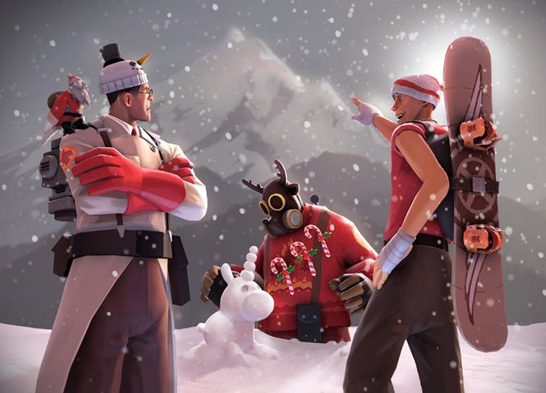 By Lyubomir AtanasovDecember 22, 2016No Comments

The Team Fortress 2 annual Christmas event, Smissmas is now live, bringing new cosmetics, taunts, and festivizer for weapons.
Here is the list of all the things that are added in this update.
”
New Festivizer Weapons(weapons that you can decorate with Christmas lights ):
The Festivizer now has more weapons it can festivize, including the Fire Axe, The Jag, The Kritzkrieg, Pistol, The Quick-Fix, Natascha, The Sandman, The Spy-cicle, Kukri, Shovel and The Scottish Resistance.

Casual Match Improvements:
At the end of a Casual match, players will now be automatically formed into a new match with the same players and teams. You’ll also get to vote on which map the new match will take place on.

New Autobalancing System:
We’re introducing a new autobalance system for Casual Matches and community servers that asks for volunteers to switch sides. Casual matches will reward you for switching teams by giving you the chance to earn bonus XP!

Big Sale in the Mann Co. Store:
It wouldn’t be Smissmas without the Spirit of Practically Giving. Look for 20%-75% off selected unlocked cosmetic crates, taunts, and tools in the Mann Co. Store through January 11th, 2017.
”
Not only that, but every player gets a “Stuffing Stuffer” item, which is just a gift box item with a lot of goodies.