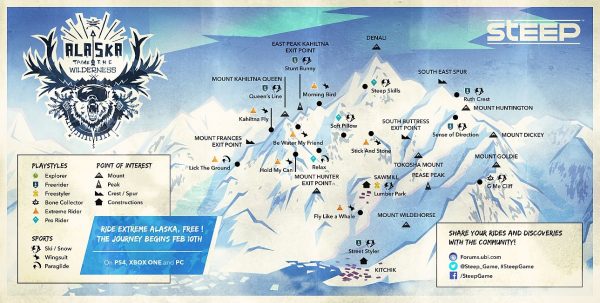 Steep Will Get Alaska Map and World Tour Tournament

By Lyubomir AtanasovJanuary 28, 2017No Comments

The online snowboarding game Steep will soon be getting an update, which will include a new map, community challenges, and a tournament. The update will be live on February 10th.

The map will be that of a mountain in Alaska. All players will be able to access the new Alaska region, completely for free. The Alaska region will also introduce some of the first “Branded Challenges,” which will be “unique challenges” that are intended for the “the fiercest players.” Those that take on the challenge will be awarded both reputation points and Steep credits.
Branded Challenges are also set to be introduced to the Alps in the near future.

And finally, Ubisoft announced that Steep has received a new World Tour mode. Similar to The Crew’s Summit tournament, the World Tour is a monthly tournament.

”
Players from around the globe, who are looking to outdo themselves and other riders, can now sign-up for Steep World Tour Tournament, a brand new monthly tournament series available for the whole community. The first competition, “Backcountry”, will start today with the qualification phase: a challenge in the cursed mountain for skiers and snowboarders, who will have to reach 5000 points to make it to the 2nd phase, the Tournament. The 32 best players on each platform during the Tournament phase will make it to the finals, where they will confront each other to win Steep credits.
”