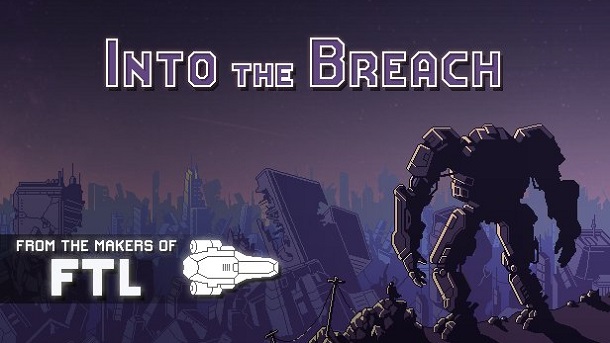 Subset Games, the makers of the rouge-like strategy RPG FTL: Faster Than Light, announced their upcoming new game called “Into The Breach”

This title is a tactics game where the enemy is giant monsters and you control a squad of giant robots, tanks, mobile artillery and other weapons of mass kaiju destruction. And the goal is the protect the cities at all cost.

”
The remnants of human civilization are threatened by gigantic creatures breeding beneath the earth. You must control powerful mechs from the future to hold off this alien threat. Each attempt to save the world presents a new randomly generated challenge in this turn-based strategy game.
”

The game seems to have a focus on environmental interaction, such as knocking enemies into buildings and mountains for extra damage, but also the mechanic that you can tell where the enemies will attack.
And there is an element of time traveling, but it is not explained how it will work, i could be just a simple explanation of how the retries work in a narrative perspective.

”
Another Chance: Failure is not an option. When you are defeated, send help back through time to save another timeline!
”

Currently, the game’s release date is labeled as “When it is finished”